Casts in the Past 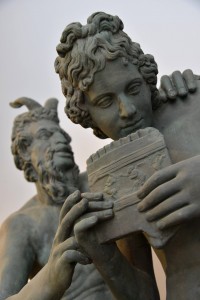 The plaster casting was already used by the ancient Egyptians as a subsidiary technique, the Greek sculptors experimented on it, and their Roman followers exploited it making copies of the admired works of art.

The plaster casts were used as a substitute for the hardly accessible originals of the ancient pieces of art in the times of the Renaissance and Classicism. The passion for the works of the ancients was shared by J. J. Winckelmann, the father of Classical Archaeology, as well as J.W. Goethe and many others. However, cast collecting was not the domain of the private enthusiasts exclusively in the. Also the great museums and universities in Europe purchased the plaster casts in order to study them; these copies of famous Greek sculptures also inspired generations of artists.

Today, the museum and university plaster collections of the Western world are experiencing their renaissance again, hosting educational, cultural and social events. The meaning of our Cast Collection is potentiated by the fact that the Czech Republic is almost totally lacking significant original pieces of ancient sculpture.

Úvod > The Casts > Casts in the Past